Full Version: Why is my new MFD/GPS giving inaccurate GPS fix or losing GPS fix?
You're currently viewing a stripped down version of our content. View the full version with proper formatting.
Introduction
Even though GPS and GNSS receivers are significantly more sensitive and more reliable than ever before, we still receive questions about loss of position fix or poor accuracy. This FAQ aims to help identify some of the potential causes and how you can identify them. Typical fix accuracy with a modern external antenna with a clear view of the sky is <0.5m error, even without Differential.

Background
GNSS systems including GPS work on the basis of measurements of the time it takes a signal to travel from satellites with known positions in the sky and very accurate atomic clocks, to your GNSS receiver. Even in an ideal case at least 4 satellites are needed. Every GNSS calculation has an error factor which results from things like clock drift in the satellites, distortions in the signal path through the atmosphere and timing measurement resolution in the receiver, so no GNSS position fix is ever perfect. With better technology you get smaller errors, that's all.

The signals a GNSS receiver has to pick up are very weak: they're transmitted at something like 25W from around 20,000km altitude and the signal strength at the surface is something like 0.000000000000001â€¬W, so it doesn't take much to block or interfere with the signals.

As well as requiring sufficient signal level from at least 4 satellites, the distribution of these satellites in the sky is important. As anyone who's plotted their position from bearings on a paper chart will know or be able to tell you, if all of your bearings are in roughly the same direction then the accuracy of your plot will be very low. What you need to get an accurate plot is satellites that are well spread in different directions and elevations from your location. It's not like FM radio or phone reception where the direction doesn't matter: in GNSS, the direction of the transmitters matters greatly.
This image illustrates this: (A) represents the perfect (unrealistic) case, (B) shows the size of position fix accuracy zone (the Dilution of Precision, DOP) for satellites that are well spread apart and a normal dose of timing error, and the large green zone in ( C) shows what happens when you try to calculate a fix from satellites that are close together in the sky: 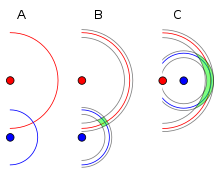 If the boat isn't moving, why does my position fix come and go?
The GNSS satellites aren't fixed (geostationary), the range of satellites that are in view changes throughout the day with new ones coming up over the horizon and others disappearing from view. The satellite signal levels will change from one moment due to changes in the signal path through the atmosphere. Normal boat movement may bring obstructions (lighting tower, sat TV, radar, masts, shore structures...) in between particular satellites and your receiver. Background noise levels on your boat (there is always noise, see below) will change as systems start and stop, loads, temperatures or supply voltages change.
For all these reasons and more, the quality of your GNSS fix will be continually changing. If it's mostly just above the fix/no-fix threshold but occasionally dips below (or relied on a satellite that drops below the horizon or goes behind an obstruction), you will get intermittent Lost Fix alarms.

Common causes of poor or unreliable GPS performance
Antenna location and sky view
It used to be that every GPS system used an external antenna mounted outside, but nowadays it's possible and commonplace to have the receiver inside the navigation display and therefore likely to be below-decks or in a cabin where it as a much less good view of the sky. As mentioned above, a GNSS receiver needs to have a good view all around, not just in certain directions (out of the window?) in order to get a reliable fix. If, for example, it's mounted into an aluminium dash or under an alloy hard-top then it may get a good fix at some times of day but not when the satellites move, or not when you turn the boat around to come home.
Conductive surfaces (steel, aluminium, carbon) block the signal most, but given the extremely low signal level in the first place even fibreglass or rain-wet bimini could be enough to cause problems.

A poor sky-view will give a very patchy fix: you may get an accurate fix one minute, very inaccurate or no fix the next. This screenshot shows the drift in GNSS position fixes over time in a system that is working perfectly but has a (deliberately) very poor view of the sky. In this test we had the receiver indoors close to a window, to simulate installation on a dash under an alloy hard-top. Note the Maximum and current SOG: If in doubt, consider mounting an external GPS antenna somewhere outside with a clear view of the sky. This could be an NMEA2000 antenna (RS150 or AR200, at the time of writing) or some displays (today, Axiom Pro or Axiom XL MFDs) have a connection for a external, passive GPS antenna (GA150) to boost the signal of the internal receiver. Both give equivalent performance but the GA150 is lower-cost if your display supports it.

Weather and atmospheric conditions, sea-state and boat movement
Poor weather attenuates and disrupts the signals from the GNSS satellites and can cause a big drop in fix accuracy. There have been fatal accidents attributed in part to over-reliance on GPS/GNSS at such times (here in Australia, for example the grounding of PriceWaterhouseCoopers in 2009), so never take your GNSS position as guaranteed. Your position accuracy will always be worse in bad conditions and this may not be obvious at the time.

Wrong GNSS receiver selected/in-use
Modern systems commonly have multiple GNSS receivers: you might have an external NMEA2000 antenna on the roof, internal antennas in MFD, another in your VHF and yet another in your AIS transceiver for example. A common cause of complaints of poor performance is when the wrong GPS is being used. If you have multiple GNSS receivers we would generally recommend that you manually select the one with the most sensitive and best-sited antenna as the main system source in your MFD's Data Source selection. Some third-party AIS transceivers are known to 'take over' when GPS source selection is set to Auto for example.
To check/change your source selection: If in doubt, choose the source with the best accuracy.

You can also see which GPS source is being used by looking in the GPS Status page:
Differential mode enabled when outside a covered region
There are a number of satellite differential (SBAS) systems around the world to improve position fix accuracy, which cover a lot of Raymarine users: 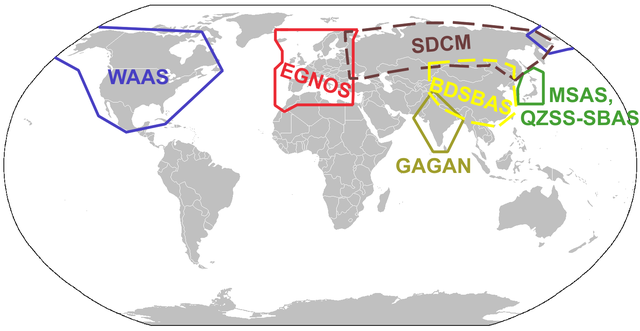 In areas outside the coverage regions of these various SBAS systems, however, you can actually get a less-accurate fix using Differential GPS than using standard fix mode. For example, in Australia and New Zealand you can pick up the fringes of Japanese MSAS, Indian GAGAN or US WAAS and when this happens your fix will be less accurate. Usually what happens is that the fix toggles between low and high accuracy as the system acquires and loses the marginal Differential signal over time. We recommend in these regions that you turn Differential off. Differential ON, in New Zealand and locking onto American WAAS satellites 131 and 133: And the same system with Differential OFF: RF interference (noise)
Because the GNSS signal power is so low it doesn't take a lot of RF noise to cause a problem. It's a common misconception that only radios and other 'intentional transmitters' can create interference, but this isn't the case. Any electrical or electronic device that operates with a frequency and is not completely steady-state (so, almost anything on the boat except an incandescent light-bulb) can potentially be a source of noise. Pumps, motors and compressors are common causes of noise at lower frequencies for example, but in the high-frequency GNSS bands the most common sources we've seen include: Of these, by far the most common is LED lighting, with USB devices coming second. As an example, here's the trace on a spectrum analyser of the GPS L1 frequency (1575.42MHz) whilst a problematic USB was being connected and disconnected with a charger. This device produces sufficient RF noise to drown out all GPS receivers within several metres radius, but works fine in other respects: How can I tell what's causing poor performance in my system?
First, check the following items:
If you are sure you have the correct GPS source selected, and that it has a good view of the sky, you need to have a look at the satellites in view and signal levels on your MFD's GPS Status page (see Wrong GNSS receiver selected/in-use.) You'll probably see one of the following things: Here's an example of poor sky-view. We can see that the satellite signal levels are good to the south-east, poor to the north-west. This was a test system in our support office window, which looks SE. See the high HDOP and low accuracy: If you're not sure what's going on
Take photos or video, as appropriate, of the contents of the GPS satellite status page and post them in a question here on the forum. We can tell you what the problem is. Almost certainly it's not an actual GNSS receiver hardware fault because they're so sensitive and reliable now.

Other known problems and points to note RS150, AR200, RS130 show a red flashing LED
This almost certainly isn't a fault, this is incorrect power supply. You almost certainly have a high and unstable charging voltage from a solar (most commonly), wind, alternator, shore-power, DC-DC convertor or other charging system: the GPS is not faulty. If you connect it to a stable, 12V, battery-only supply then it will almost certainly be fine.
Note that a multimeter is not a reliable test of power supply, the only reliable test of power supply is an oscilloscope. Many power supplies that look fine on a multimeter are anything but when measured more sensitively.