A best practice for marine electronics installation is to install sufficient circuits to support operation of critical system components in the event of a major power circuit or system component failure. Also, careful thoughts to any unique uses of the equipment (ex. monitoring the VHF radio while at anchor, instrument anchor watch, etc.) should be considered when selecting required marine electronics devices and creating power circuits. Finally, an understanding of dependencies can also aid in determining which devices should be included within the same circuit (ex. the HS5 RayNet Network Switch is only needed when the MFD(s) will be powered ON and as such, would make sense to include within the same power circuit). As Raymarine MFD's and i50/i60/i70 Instrument Displays support a last power state memory feature, the equipment may be switched ON/OFF from a single location (i.e. the breaker/switch panel), eliminating the need to switch ON/OFF equipment via each product's POWER button. This can be especially convenient in larger systems.

Of Raymarine's currently and recently manufactured products, the following are designed to be powered via their communications interface:

Please note that Raymarine MFDs feature a last power state memory feature, permitting the MFD's to be also be switched ON/OFF via the power circuit supplying the MFD(s). On my own boat, I utilize this feature to switch all of my electronics ON or OFF via the breaker panel. To support doing so, I have installed a breaker panel to create separate power circuits for each of the following:

Circuit breakers and fuses are primarily designed to protect the vessel's circuits and device cables, not the circuitry within the marine electronics. If installing marine electronics devices within a circuit which is protected by a breaker/fuse having a higher rating than has been specified for the device(s) being interfaced to the circuit, then it will be necessary to additionally install a fuse inline with each product's power cable to protect the product's wiring. Third party fuse blocks, such as those produced by Blue Sea Systems, may be used for such purposes and to locate these fused circuits in a location where they may be easily be accessed. 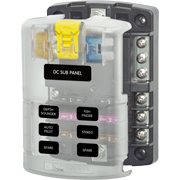 Fuse / breaker recommendations for protecting circuits supplying power to Raymarine products may be found within the respective product's installation instructions.

As Raymarine MFDs, AIS Transceivers, Autopilot ACUs, VHF radios, SiriusXM Satellite Weather Receivers, radomes, radar pedestals, fishfinder sounder modules, and Ethernet Network Switches are neither designed to be powered via a SeaTalkng/NMEA 2000 backbone nor an Ethernet network, these products should be powered using the power cables which these products have been manufactured with/packaged with or via the product's power terminals.

Raymarine Digital/HD Digital Radomes and HD/Super HD Radar Pedestals will go into sleep mode when a MFD is not sensed within the Raymarine Ethernet network. However, after the MFD is switched ON, then the radome or open or open array should detect the MFD and respond to the MFD's commands. It is considered to be a best installation practice that radomes and radar pedestals be installed on a dedicated breaker or dedicated switched power circuit permitting the radome or pedestal to be switched ON/OFF without affecting the power state of the system's other devices. Should the radar not awaken after the MFD is powered ON, then the radome or pedestal's power circuit may be switched OFF and then ON again to permit the radar to re-boot and then sense the MFD. Unplugging the Digital Radar Cable from the radome of open array pedestal and then reconnecting it may be used as a testing method to verify whether it restores operation of the radome or pedestal. Customers requiring the assistance of a Raymarine Certified Installer or Installer may find one here.